What’s Considered a Serious Injury in a Car Accident? 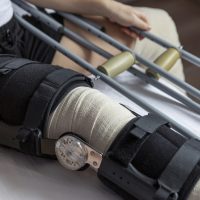 New York is one of only a few states that has a “no-fault” scheme when it comes to car crash injury claims. People file a claim with their own insurance provider after a crash, regardless of fault, and are limited to certain categories of damages and the limits of their insurance policy. In order to get out of the no-fault scheme, the victim must allege that they suffered a “serious injury.” Read on to learn about how to prove a “serious injury” has occurred, and call a dedicated New York car accident lawyer if you or someone you care about has been hurt in a crash in The Bronx or NYC.

In most states, when a person is injured in a car crash due to the negligence of another driver, they can bring a personal injury claim against the at-fault driver. That driver and their insurance company will be responsible for compensating the injured party. New York instead follows a “no-fault” scheme under which each party involved in an accident must file a claim with their own insurance provider, regardless of who caused the accident. Unless they satisfy an exception to get outside of the no-fault scheme, they are limited to filing with their own insurance company.

No-fault insurance is generally more limited than a typical personal injury claim. An injured party can collect compensation for accident-related medical costs, lost income for work missed due to the accident up to a maximum of three years, and property damage. Injured victims cannot, for example, recover damages for pain and suffering, which is often the largest part of a car accident injury award.

To get outside of the no-fault scheme and file a claim directly against the at-fault driver, the accident victim must allege that they suffered a “serious injury” in the accident. Victims who have suffered a serious injury can sue for the same damages available under the no-fault scheme as well as additional damages such as pain and suffering, disfigurement, and punitive damages.

If you were injured in a car accident in New York, talk to a qualified and effective New York car crash attorney to find out if you have expanded options for recovery.

If you or someone you love has been hurt in a car crash in New York, get seasoned and dedicated legal help recovering the money you’re owed by contacting the Bronx offices of the Kohn Law Firm for a free consultation at 718-409-1200.