What Does Uninsured/Underinsured Motorist Coverage Mean? 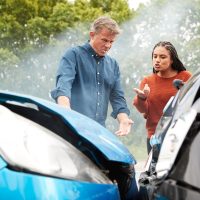 New York law requires drivers to purchase a minimum amount of insurance coverage before getting on the road. In addition to the minimum required liability coverage ($25,000/$50,000 for bodily injury and $10,000 for property damage), drivers are also required to carry minimum supplementary uninsured/underinsured motorist coverage (SUM) in the same amounts. What does this supplemental insurance cover, and when does it apply? Read on to learn about uninsured/underinsured motorist coverage in New York and contact a knowledgeable Bronx car accident lawyer for help after a New York traffic accident.

Even though the law requires all drivers to carry a minimum level of insurance, not everyone follows the law. Some people on the road drive without licenses, without insurance, or with less insurance coverage than mandated by New York law. Some reports estimate that as high as 15 percent of drivers on New York roads are operating without insurance. Also, some drivers flee the scene of an accident without exchanging information, leaving injured parties with no at-fault driver to sue. If you find yourself in an accident caused by someone without insurance, and you are seriously injured, you could be left without a pathway to recover for your injuries. Your uninsured/underinsured motorist coverage is meant to cover you in that situation.

SUM kicks in whenever someone else should be liable for damages caused in an accident, but they lack the requisite insurance to cover the damages or they cannot be found. If you are driving, for example, and anyone in your car is injured by the driver of an uninsured vehicle, or by a hit-and-run driver, then your SUM would step in to cover their damages. SUM also kicks in when you or a member of your family is injured while in an uninsured vehicle or are injured as a pedestrian by an uninsured or hit-and-run driver. If you are injured by a driver and they have insurance, but your medical bills and other damages exceed the limits of their coverage, your SUM could also apply at that point to cover your additional damages.

If you were in an accident with an uninsured driver, or if your car insurance carrier is trying to lowball your expenses after an accident, a seasoned car accident lawyer can help you maximize your recovery.

Protect Your Rights and Your Finances After a Bronx Car Accident

If you or someone you love has been hurt by someone else’s negligence in New York, find out if you are entitled to money damages for your injuries by contacting the seasoned and effective New York car crash lawyers at the Bronx offices of the Kohn Law Firm for a free consultation at 718-409-1200.