Can You Sue if you Were Injured in an Uber Accident 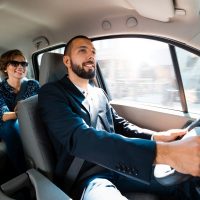 These days, rideshare vehicles like Uber are nearly as prevalent as yellow taxis. The laws and regulations governing rideshare drivers are not, unfortunately, clear-cut. In many ways, Uber drivers are treated differently compared to other commercial drivers. If you were in an accident with an Uber vehicle, you may or may not be able to claim liability against the company. Thankfully, Uber providers extensive liability insurance for drivers, as mandated by New York law. Whether you can take advantage of that insurance depends on exactly when and how your accident occurred. Learn about Uber accidents below and call a seasoned New York car crash lawyer if you’ve been injured by a negligent driver in the Bronx.

Hit by an Uber Driver

If you were hit by an Uber driver either as a pedestrian, as another driver, or as a passenger in another car, whether you will be able to bring a claim against Uber directly depends on the circumstances of the accident. Under New York’s no-fault insurance scheme, your first resort after an accident is your own insurance policy. If you suffered a “serious injury,” however, then you might be able to claim liability against the at-fault driver. If you can sue the Uber driver, the question becomes whether you can also sue Uber.

Uber argues that its drivers are independent contractors, rather than employees, which would prevent injured parties from suing Uber for the conduct of drivers. Legal merits of that argument aside, New York State requires Uber to carry insurance to cover injury to parties caused by Uber drivers. In accordance with the law and Uber’s own practices, Uber maintains insurance for drivers that gets triggered depending on when the accident occurred:

Injured as an Uber Passenger

If you were injured in an accident while riding with an Uber driver, then you might or might not have a claim against Uber, depending on who caused the crash.

If you or someone you care about has been injured in a New York car crash, find out if you’re entitled to money damages for your injuries by contacting the passionate and knowledgeable New York car crash lawyers at the Bronx offices of the Kohn Law Firm for a free consultation at 718-409-1200.