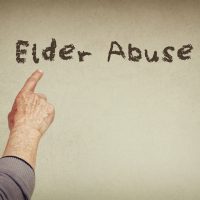 As the American population ages and as the average American lives longer than ever before, more and more individuals are entering nursing homes or needing in-home care. If your parent, relative, or loved one is in an assisted living facility or has a caregiver who comes to their home, you may have conducted months of research before choosing the right facility or caregiver with the reputation you wanted and cost your family could afford. Unfortunately, even well-rated facilities have been found to employ staff members who mistreat or abuse vulnerable elderly residents. Read on to learn about the problem of elder abuse and how to identify signs that your loved one may be the victim of abuse.

What is Elder Abuse?

Elder abuse is a tragically wide-spread phenomenon. A report published by the World Health Organization asserts that in 2016, about 15% of all seniors, or one out of every six, was subjected to some form of abuse. The report also detailed the results of a survey conducted among nursing home staff on the prevalence of abuse. Thirty-six percent of respondents said that they had witnessed one or more incidents of abuse over the course of the previous year, and ten percent of nursing home staff admitted that they had themselves committed an act of abuse over the past year. The national ombudsman that oversees complaints regarding nursing homes and assisted living facilities has reported that some 14,258 individuals filed complaints of abuse, gross neglect, or exploitation in the US over the course of a single year.

Elder abuse can have serious effects on the mental, emotional, and physical health of its victims. One study found that victims of elder abuse were twice as likely to die prematurely than those who had not been victims of abuse. If your parent or loved one is under the care of an in-home aide or nursing home, it is important to visit often and stay vigilant for signs that they have been subjected to abuse. These signs can include:

If you have noticed any of these signs, contact a seasoned New York nursing home abuse attorney to learn your legal rights in the event of elder abuse.

For assistance with filing a claim of nursing home abuse in New York, contact the skilled and dedicated Bronx personal injury attorneys at the Kohn Law Firm for a free consultation at 718-409-1200.