Rear-End Car Accident Injuries and How to Recover 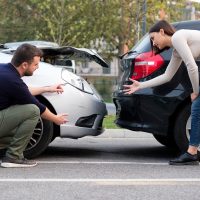 Rear-end collisions occur when the front of one vehicle collides with the backside of another vehicle. These types of crashes commonly occur at stop signs, traffic signals, and in parking areas. They can also occur at higher speeds on highways or freeways when a driver is forced to suddenly stop and trailing drivers are either distracted or driving too closely to brake or swerve in time. Although common, rear-end collisions are still dangerous. Read on to learn about rear-end accident collisions and how to recover compensation if you’ve been seriously injured in a crash. A zealous Bronx car accident attorney can help you bring your claims if you’ve been hurt in a New York rear-end car accident.

Rear-end car accidents can injure drivers and passengers in both the front and rear vehicles. Most commonly, occupants of the vehicle in front suffer some sort of neck or shoulder soft tissue injury as a result of the trauma sustained in the collision. Occupants of both vehicles can suffer many additional injuries, including the following:

Whiplash syndrome is one of the most common injuries suffered in rear-end car accidents. In a rear-end crash, the torso is thrust forward suddenly while the head and neck fly backward, swinging back and forth in a “whipping” motion. This hyperextension and subsequent hyperflexion can cause soft tissue injuries such as sprains, strains, and tears, as well as neurological damage.

Because of the nature of the whipping motion, the head and neck travel much faster than the vehicles involved in the crash. Even in a low-speed “fender-bender” at 15, 10, or even 5mph, the head and neck can be tossed about so violently as to cause whiplash. Whiplash injury can lead to chronic pain, numbness, and stiffness, as well as headaches, fatigue, blurry vision, and neurological issues including mood swings and trouble sleeping.

Recovering Compensation after a Rear-End Collision

To recover compensation after a rear-end accident, you’ll need to demonstrate the other driver was at fault. In most rear end-collisions, the driver in the rear is to blame. If the rear driver was tailgating or speeding, then they did not give themselves sufficient time to stop should the driver in front need to slam the brakes to avoid a hazard. The rear driver may have been driving while distracted, drowsy, or drunk, limiting their reaction time. Inclement weather and road conditions (ice, wet roads, rain, fog, wind, snow) increase the likelihood of a rear-end crash and thus call for additional caution; drivers who fail to adjust for poor driving conditions may be held liable for accidents that result.

The driver in front may also be held responsible if their negligence caused the crash. If they stopped suddenly and without reason, if they suddenly changed lanes without signaling, or if they otherwise failed to follow the rules of the road, they could be liable for any injuries caused in a rear-end collision. A seasoned rear-end crash attorney can help you recreate the accident in order to demonstrate who was responsible and the harm that driver caused you.

If you or someone you care about has been hurt in a New York rear-end car accident, find out if you’re entitled to money damages for your injuries by contacting the zealous and successful New York car accident lawyers at the Bronx offices of the Kohn Law Firm for a free consultation at 718-409-1200.