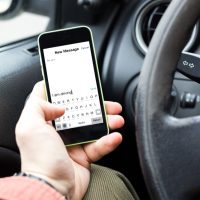 Ask any safety expert whether phone use while behind the wheel is dangerous, and you’ll hear the same answer—a resounding “yes.” However, finding out whether drivers were texting before a crash can be a challenge, since this has historically required either an eyewitness seeing the driver use their phone or the driver confessing to using their phone before a crash. This may soon change, should a law currently under consideration by the New York state legislature pass. The law would allow police to analyze the phones of all those involved in accidents with a device called the Textalyzer.

Phones in use before crashes over half of the time

While experts understand the dangers posed by phone use behind the wheel, the research on the share of accidents caused by this habit is muddled. As a result, only about 10% of all fatal crashes are attributed to distracted driving in statistics published by the National Highway Traffic Safety Administration. In contrast, a recent study conducted by Cambridge Mobile Telematics has found that drivers involved in accidents used their phones before a crash far more often. The company has created an app that drivers can install on their smartphones which can provide feedback on aspects of their driving habits, such as speed, braking, turning, and phone use while behind the wheel. Based on data gathered by the app, Cambridge Mobile concluded that in 52% of drives where a collision occurred, the driver’s phone was in use for, on average, two minutes prior to a crash.

Textalyzer could curb phone use

In New York, law enforcement may soon have an even more effective way to find out whether a driver was using their phone before being involved in a crash. The New York state senate has recently approved of a bill that would allow law enforcement officers across the state to scan the phones of every driver involved in a crash with a device known as the Textalyzer. The Textalyzer looks at data such as what apps have recently been opened, whether the phone’s keyboard was activated, and the typing patterns on the keyboard, to identify whether a driver had been texting in the moments before a crash. According to representatives from Cellebrite, the company that created the Textalyzer, the device is not able to read the content of messages, but can only look at how the phone was recently used. Privacy advocates have expressed concerns over requiring citizens to turn over their phones to law enforcement, but safety advocates such as Deborah Hersman, president of the National Safety Council, have expressed enthusiasm for the possible advances in safety that could result from use of the device.

If you’ve been injured in an accident with a distracted driver in New York, find out if you have a claim for money damages stemming from the crash by contacting the determined and effective Bronx personal injury lawyers at the Kohn Law Firm for a consultation, at 718-409-1200.