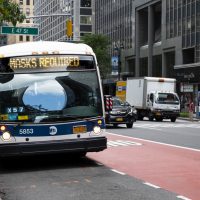 A bus operated by New York’s Metropolitan Transit Authority (MTA) crashed off an overpass over the Cross Bronx Expressway, injuring at least eight people. The terrifying accident is a reminder that even city buses are at risk for a crash. Read on to learn about the accident and whether injured passengers may file claims against the MTA, and if you’ve been hurt in a Bronx motor vehicle accident of any kind, call a dedicated and professional New York car accident lawyer at the Kohn Law firm for help.

At around 11:10 p.m. on a recent Thursday night, an MTA Bx35 bus was carrying a number of passengers down University Avenue. The 55-year-old driver was on his regular route when he tried to turn left off of University onto a ramp to the Washington Bridge. The bus suddenly veered off the road. Half of the bus was left hanging off University Avenue overlooking the Cross Bronx Expressway below, while the rest of the bus crashed onto the access road below. According to officials, the bus fell around 50 feet down.

All seven passengers as well as the bus driver were injured in the accident. The bus driver suffered from contusions, lacerations, and a broken jaw. At least one passenger was seriously hurt. The remaining passengers suffered a range of injuries. Although the driver was an 11-year NYC Transit veteran with a clean safety record before the crash, officials stated that the driver’s excessive speed may have caused the accident. He was attempting to make a sharp turn while traveling between 17-26 mph. While the speed limit for the road is 25 mph, an MTA spokesperson stated that the “appropriate speed for taking a turn such as this is between 3 and 4 miles per hour.”

Can You Sue the MTA?

The MTA is a quasi-private corporation, overseeing both publicly- and privately-operated systems. Whenever a government or quasi-government agency is involved in a personal injury incident, claims can easily get complicated. Thankfully, if you were injured in an accident involving the MTA, you might be able to recover money damages just like any other personal injury claim.

You will need to demonstrate that an MTA employee committed some form of negligence. An MTA operator might have committed an error, such as by speeding or driving while intoxicated, or another MTA worker may have created or permitted a hazard by failing to adequately maintain the tracks or the station. MTA liability can arise due to traffic accidents as well as an injury sustained at the station, such as if someone falls from the platform.

Suing the MTA requires jumping through additional hoops beyond what would be required to sue a private citizen or company, including filing a Notice of Claim within 90 days from the date of injury. If you were hurt as a result of the actions of the MTA, it is important to get help from a knowledgeable personal injury attorney as soon as possible in order to preserve your rights.

If you or someone you love has been hurt by someone else’s negligence in New York, find out if you’re entitled to money damages for your injuries by contacting the talented and knowledgeable New York car crash lawyers at the Bronx offices of the Kohn Law Firm for a free consultation at 718-409-1200.