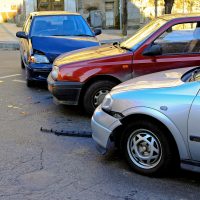 According to research by the National Highway Traffic Safety Administration (NHTSA), intersections are the site of nearly 40% of all traffic accidents nationwide every year. The NHTSA’s analysis shows that about 96% of all those accidents are caused by driver error, rather than vehicle defects or atmospheric conditions.

In about 44% of all accidents occurring in intersections, law enforcement and accident reconstruction experts pegged the cause as “inadequate surveillance.” In other words, the driver failed to spend a sufficient amount of time looking for oncoming cars, pedestrians, motorcycles or cyclists before making a move, resulting in an accident.

Intersection accidents can also stem from a driver making a false assumption about how another driver will behave. For example, a driver who wishes to turn left at an intersection may assume that an oncoming driver traveling in the opposite direction will stop at a yellow light, despite the fact that the driver shows no signs of slowing down. If the driver turns left based on that assumption, but the oncoming driver didn’t stop, this assumption could result in a major accident.

Safety experts recommend that drivers exercise even more attention and caution while driving through intersections than in normal driving. While it might seem safe to assume that other cars will obey traffic laws, never assume that you know what another driver will do in an intersection. Wait to see evidence that they’re yielding to other cars before turning right on a red light, or before turning left in front of you. Always pause for a moment before entering an intersection after your light turns green to allow straggling cars traveling in opposing directions to get through the intersection. Also, check your blind spots for other cars, bikes and pedestrians before turning.

If you or someone you love has been hurt in an intersection accident in New York, find out if you’re entitled to money damages for your injuries by contacting the skilled and knowledgeable Bronx offices of the Kohn Law Firm for a consultation, at 718-409-1200.