How Tailgating Causes Accidents and How to Prevent It 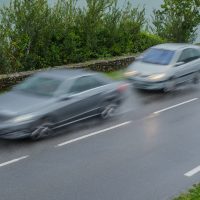 Drivers in New York and around the country have many bad habits. Aggressive or impatient drivers can be especially frustrating as they dart between cars in traffic, drive on the shoulder, or tailgate, expecting to shave precious seconds off their commute. Maneuvers like tailgating are not only annoying; they are dangerous. Tailgating reduces the amount of time a driver has to react to an unexpected stop or road hazard, increasing the likelihood of an accident. Read on below for a discussion of tailgating and how you can reduce the risks of tailgating while you are on the road. If you were hurt in a traffic collision in New York, call a dedicated Bronx car accident attorney for advice and assistance.

Why Do People Tailgate?

Tailgating refers to when a driver follows a vehicle too closely for the speed at which they are traveling. Tailgating can occur at any speed, but we generally think of tailgating on highways and freeways where it’s especially dangerous.

People tailgate for any number of reasons. They may be especially aggressive drivers at all times, employing unsafe and aggressive maneuvers. They may be in a hurry or running late. Drivers may tailgate as a form of revenge if they believe another driver cut them off or is driving too slowly for the flow of traffic. When there’s heavy traffic generally, causing stop-and-go driving, tailgating is very common. Drivers may also tailgate simply because they are distracted or careless, not realizing how little space they’ve given themselves.

Why is Tailgating Dangerous?

Rear-end collisions are the single most common type of car accident. Rear-end accidents are also extremely dangerous. Even a low-speed rear-end crash can cause whiplash and traumatic brain injury. Higher-speed crashes are likely to lead to even more serious injuries and may even be fatal.

Tailgating greatly increases the risk of a rear-end collision by limiting the amount of time a driver has to stop or swerve should the front vehicle suddenly stop. If you do not have enough time to stop before colliding with the car in front of you, you are technically tailgating. Drivers need enough time to react to hazards in front of them, and the vehicle needs sufficient time to stop upon applying the brakes. Poor weather conditions such as rain or snow may require even more space than normal.

Tailgating can also frustrate other drivers. Drivers who are being tailgated may try to exact revenge by tapping their brakes, known as a “brake check.” This can also be dangerous, essentially inviting an accident to occur.

How Can I Avoid Tailgating?

Safe drivers can employ several tactics to reduce the risks of tailgating. While you cannot control what another driver does, you can control your own reaction. Maintain your composure and do not “brake check.” If you have space, pull into an adjacent lane and let the tailgater pass. Try to avoid cutting other drivers off to avoid giving them a reason to feel frustrated. Do not make eye contact or otherwise engage with the tailgater, as that may escalate the situation. You are safer if that driver is no longer in your vicinity; don’t make their problems your problems.

Safe drivers should also practice defensive driving generally, keeping aware of other vehicles on the road. Drive the speed limit or maintain a speed consistent with the flow of traffic, and if you are driving more slowly than the flow, move to the right lane. The more responsible you are, the safer you and your passengers will be.

If you are driving behind other vehicles, make sure to give them a proper amount of space. Do not become a tailgater, riding right behind another driver and creating an unnecessary hazard. Traffic safety experts say the rule of thumb is to maintain a minimum three-second distance behind other vehicles. At 65 miles per hour, for example, you’re traveling at 95 feet per second, which means leaving around 285 feet between you and the other vehicle. You can use objects on the road to check your distance, such as a street sign or overpass.

If you or someone you care about has been hurt in a New York tailgating accident, find out if you’re entitled to money damages for your injuries by contacting the seasoned and effective New York car accident lawyers at the Bronx offices of the Kohn Law Firm for a free consultation at 718-409-1200.