Injuries From Slip & Fall on Hands/Wrists 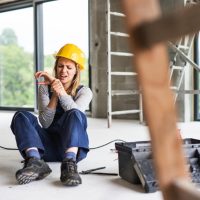 “FOOSH” is a nickname given by medical professionals to injuries sustained after “falling onto an outstretched hand.” These injuries often occur when someone falls forward, often in a trip and fall accident. When someone falls forward, they are likely to throw out their hands to catch their fall. While an injury to the hand or wrist is better than an injury to the face and skull, these injuries can still be painful and debilitating.

The severity of a FOOSH injury results from a number of factors, including the force of the impact with the ground, the type of surface onto which the victim has fallen, the way in which they fell, and whether they had any pre-existing injuries or infirmities prior to the fall. FOOSH injuries often occur during sports such as snowboarding and downhill skiing, skateboarding, and mountain biking, as well as in trip and fall accidents in which the victim falls forward.

A sprain refers to damage to the ligaments, the tissue that connects bone to bone. Sprains can range from a minor tear to a complete rupture. After a trip and fall or slip and fall, victims often suffer sprains to the thumb, the wrist, or other fingers.

A dislocation occurs when a bone is pushed or pulled out of place, meaning out of the normal relationship with the bones that make up the joints. Dislocations are commonly caused by sudden, direct blows to the joint, such as in a slip/trip and fall. In a fall, dislocation of the finger is common as the finger is forced into hyperextension or hyperflexion by the sudden force of catching the falling accident victim.

Dislocations can be problematic even if the bone pops back into place. Dislocation can lead to stretching or tearing of the soft tissue in or around a joint, leading to a sprain or strain. The dislocation can damage the nerve and blood vessels surrounding the injury. Additionally, dislocation can also involve a fracture to the base of the bone at the joint, causing a fracture extending into the joint.

Fractures refer to cracks or breaks in the bones. Slip and fall or trip and fall accidents cause sudden, forceful impact to the hands and wrists, putting undue pressure on the hand, finger, and wrist bones. Fractures to the finger can occur when the victim hits the ground with a closed fist (commonly known as a “boxer’s fracture”). Hand and wrist fractures are also very common with trip and falls or slip and falls.

Seasoned Advice and Representation After a Bronx Slip and Fall

If you or someone you love has been hurt by someone else’s negligence in New York, find out if you’re entitled to money damages for your injuries by contacting the seasoned and effective New York car crash lawyers at the Bronx offices of the Kohn Law Firm for a free consultation at 718-409-1200.