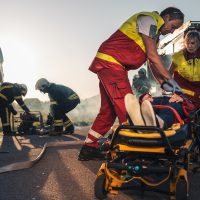 If you were seriously injured in a car crash or otherwise injured as a result of someone else’s negligent or reckless behavior, you have the right to seek compensation. In a personal injury case, damages are generally split between “compensatory” and “punitive” damages. Cases in which punitive damages are available can result in especially large damages awards. But what exactly is the difference between the two types of damages? Read on to learn about compensatory and punitive damages in a New York personal injury case. If you were hurt in a car crash, slip and fall, or any other accident caused by someone’s negligence in New York, call our skilled Bronx personal injury attorney for advice and assistance.

What Are Compensatory Damages?

Economic damages are the direct, quantifiable (or at least estimable) harm the plaintiff suffered as a result of the incident giving rise to the claim. Economic damages cover out-of-pocket financial harms including:

Economic damages can be used to compensate for both physical and mental injuries, so long as there is a direct financial cost (e.g., the cost of psychiatric care for a mental health issue deriving from the incident).

Noneconomic damages are not recoverable from insurance in a no-fault claim after a car crash. In order to recover noneconomic damages after a New York car accident, the accident victim must get outside of the no-fault system to file a direct claim against the defendant.

What Are Punitive Damages?

To recover punitive damages in a New York personal injury case, the plaintiff must show that the defendant’s actions were so deliberately and consciously negligent that they constituted “willful and wanton” behavior showing a callous disregard for human life or safety. In a car accident case, for example, the plaintiff would need to show either that the at-fault driver deliberately caused the crash or showed an egregious disregard for the safety of others by, for example, driving while severely intoxicated.

If you or someone you care about has been hurt as a result of someone else’s negligence, find out if you’re entitled to money damages for your injuries by contacting the dedicated and accomplished New York personal injury lawyers at the Bronx offices of the Kohn Law Firm for a free consultation at 718-409-1200.