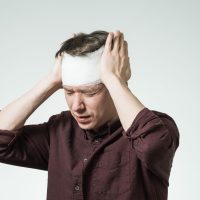 A serious car crash can lead to a variety of injuries ranging from mild to severe. Commonly, car crash victims will jolt around or out of their seats, crashing their heads into either an airbag, steering wheel, dashboard, seat, or even the street. Pedestrians and bikers may be hit directly in the head or experience head trauma when colliding with the street or other objects. Blunt force head trauma can be extremely dangerous, causing a variety of temporary or permanent debilitating effects, and in the most serious cases, death. Continue reading for a discussion of blunt force head trauma in car crashes, and call a passionate and dedicated New York car accident lawyer if you’ve been injured in a car crash in the Bronx.

Blunt force trauma is a form of physical injury that occurs when a part of the body is hit by a sudden, intense impact. Blunt force is contrasted with penetrating trauma, which occurs when an object enters the body (such as a shard of glass or piece of metal). Blunt force head trauma is extremely dangerous, especially because it carries the risk of causing traumatic brain injury (TBI). TBI occurs when head trauma causes the brain to rattle around the skull, becoming bruised, stretched, torn, or deformed.

TBIs can be mild or severe. Mild TBI can lead to headaches, nausea, dizziness, sleeping problems, mood changes, and sensory changes. More severe TBI can lead to long periods of unconsciousness, permanent loss to senses such as sight, smell, and hearing, seizures, migraines, repeated vomiting, clear fluid draining from the ears or nose, loss of coordination, and bodily weakness. Anyone who experiences symptoms of TBI should see a doctor immediately.

One of the most common injuries following a blunt force trauma to the head is a concussion. Concussions occur when a person experiences head trauma that bounces their brain around inside their skull, which can stretch or bruise nerves and blood vessels and cause chemical changes in the brain.

Symptoms of a concussion to watch out for include:

Victims of concussion injury can suffer from pain, memory loss, irritability, fatigue, light and noise sensitivity, and other debilitating conditions for days or weeks following an injury. Victims of multiple concussions can experience more severe symptoms such as seizures and permanent function loss that can last even longer. While a single concussion is unlikely to be life-threatening or cause permanent damage, multiple concussions can lead to permanent structural changes in the brain and can be fatal.

Get Effective Help After Your Bronx Car Accident

If you or someone you care about has been injured in a New York car crash, find out if you’re entitled to money damages for your injuries by contacting the seasoned and effective New York car crash lawyers at the Bronx offices of the Kohn Law Firm for a free consultation, at 718-409-1200.